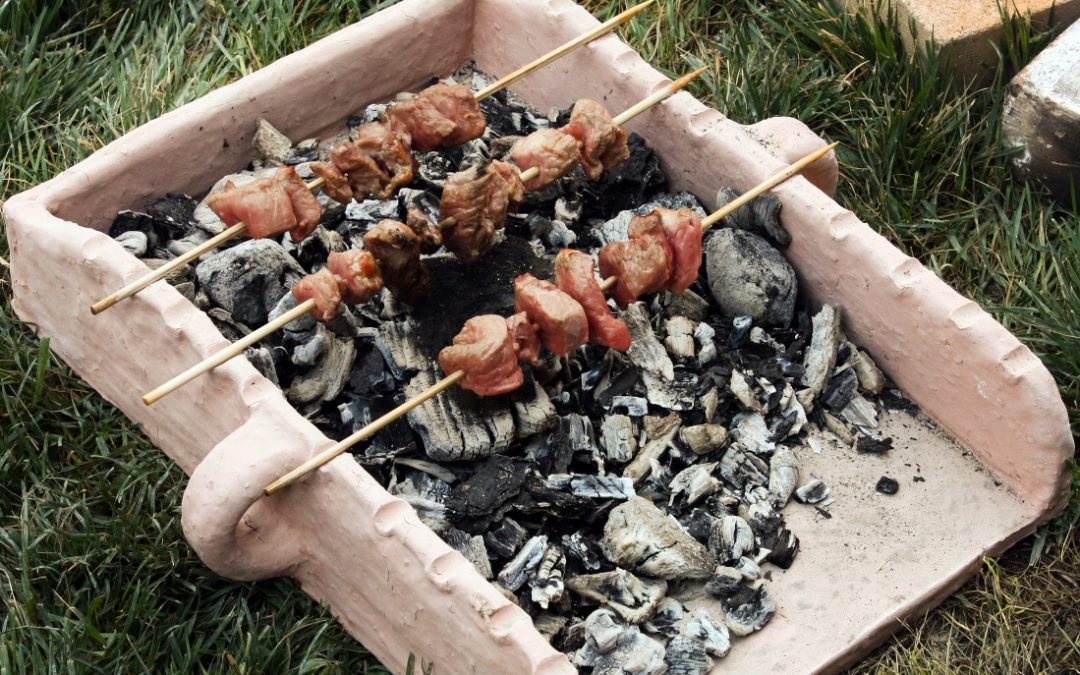 Souvlaki: Perhaps the most basic delicacy of Greek gastronomy, but also one of the most famous ones!

In Greek culture, the practice of cooking food on spits or skewers historically dates back to the Bronze Age. Archaeological findings and writings clearly show that today’s souvlaki comes from the ancient Greeks.

Excavations in Santorini, Greece, have unearthed stone barbecue holders for skewers which were used before the 17th century BC and were popular before the disastrous eruption of the island’s volcano.

This food, known as obeliskos “spit”, was even mentioned in the works of Aristophanes, Xenophon, Aristotle and others. A dish of bread stuffed with meat which resembles the way pita souvlaki is served today. With pita bread was also attested to by Athenaeus in his “Deipnosophistae.”

According to Athenaeus, the skewered pieces of meat and other goods were sold in thermopolia, cart-like stands which amazingly featured hot coals, operated in markets.

Along with the similar meats they served, the carts themselves were like today’s cantinas or street vendors, essentially selling the fast food of the time, including chestnuts, doughs, and salted cold cuts. The clay pottery found indicates that the cooking utensils were transportable and they were used by street vendors.

A royal meal with kanthavlo, “κάνδαυλο”, small pieces of lamb, goat or pork meat passed into small spits, cooked in special hatcheries to remove the fat, the -in Greek- “κρατευτές”, the ancient Greek grills where souvlakia were cooked.

The form of the dish changed to Greece with the arrival of the refugees from the Greek-Turkish war of 1919. The refugees that came from Asia Minor (modern Turkey) translated their art and knowledge, including in bakery. The first ovens from the refugees were opened in Athens making pita bread for souvlaki, which until then did not exist. That had as a result the blend of the ancient Greek souvlaki with the kebap.

Souvlaki skewers served as fast food started to be sold widely in the 1960s, after being introduced by vendors from Viotia. The first known use of the word souvlaki in English was in 1942.

Today souvlaki is known and served all over the world in many forms and ingredients, including vegetable, cheese and even fruit. The addition of tzatziki with yogurt as a sauce was also included in the kanthavlos meal instead of soft cheese.