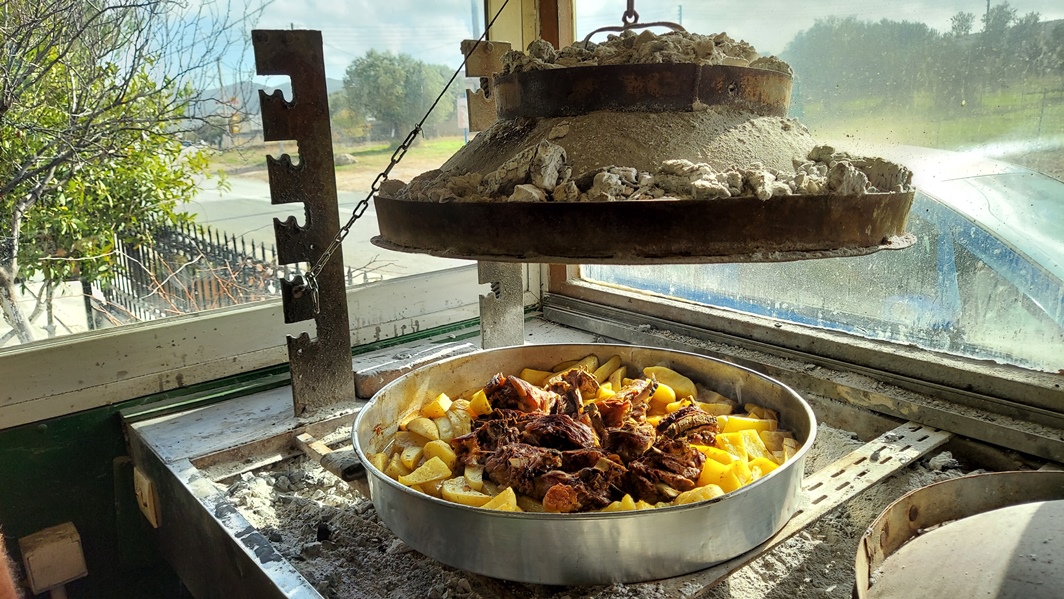 One of the traditional methods people still use to cook in Greece – especially in Epirus and Northern Greece is the GASTRO or GASTRA, an ancient mobile “oven”, a concave metal or clay structure with a handle and a hoop around it to keep the ashes and coals in place. This cooking method was used by shepherds, particularly the “Sarakatsani”, who move extensively all over the Epirus Mountains.

Our ancestors prepared their bread with the “pnigea” (that was the name used in Ancient Greece). This method involved placing burning coals on the ground, place the bread on top of the ashes in a cooking pan and cover the pan with the hot Gastro.

They did not only bake bread but any kind of meats, greens and pulses.

First start the fire with branches that burn quickly and produce coals in a matter of minutes. Then they cover the burning wood with the Gastro to make it hot. When the fire diminished and the ground was hot, they removed the coal and place the pan with the food on top of the ashes, cover it with the hot Gastro, and the hot coals were then placed on or around the lid to maintain the temperature, making it this way the perfect mobile oven. As you can be seen in the picture below, there is a hoop on the lid turned upwards to hold the ashes and coals that were placed on the Gastro.

Stone ovens made their appearance later during the Roman period.

I had the opportunity to taste food cooked with the Gastro twice in my search for Savor Greece season II, once in Ioannina where Theodore Alexiou from the Gastronomy Club of Epirus cooked “Gigantes” giant beans out on the ground at a farm, and the other time at a traditional taverna called “Stafylomeli” in Keratea close to Athens, where Costas Ioannou cooked an amazing goat with potatoes.

Both times the taste, the flavor and the aromas of the food were comforting and simply delicious. Modern ways might produce fast and easier methods of cooking, but nothing can replace the feeling (and pleasing memories that are buried in our DNA) when tasting traditional dishes, cooked the traditional way.

You will find episodes in my channel on YouTube, at Savor Greece season II after Feb 5th 2023. Please subscribe and stay tuned.