Christopsomo – The Bread of Christ 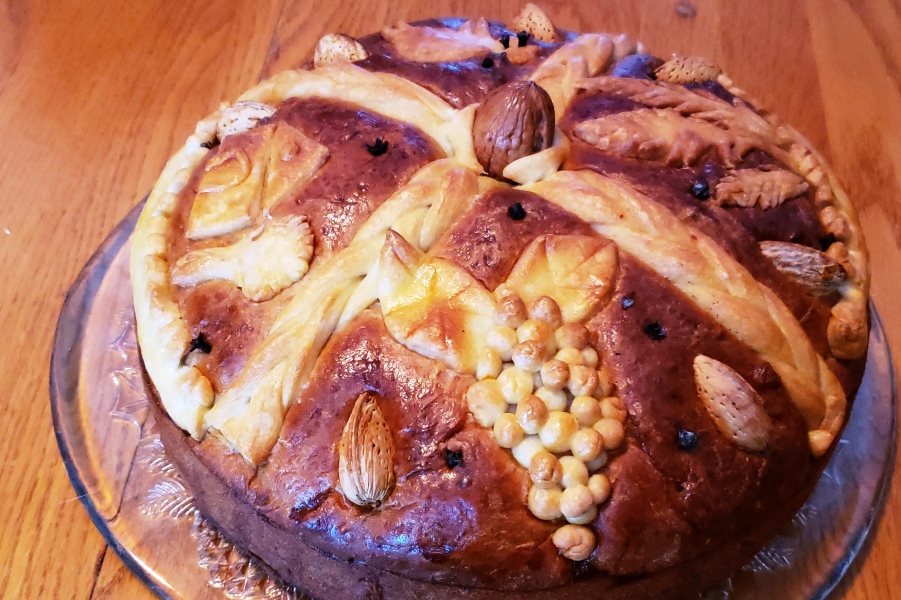 Christopsomo according to tradition is the bread that women in Greece make in honor of Christ with special care and patience, on Christmas Eve. It is the blessed bread of the Christmas table, and it will represent the life of the master of the house and his family. The shape, form and decoration of this bread are regulated by local customs.

Traditionally, in the middle of the surface of the Christopsomo, they form the cross with dough and at the edges they place almonds and walnuts, which are symbols of rich production. Its decoration is even determined by the profession of the house owner. Thus, if he is a farmer or a shepherd, on the Christmas bread they form oxen and a plow or sheep and goats.

On Christmas day, the tradition imposes a specific ritual for the cutting and distribution of the Christmas bread. The head of the table, blesses the bread, cuts it with his hands and distributes it to the attendees, whether they are members of his family or they are just guests. This movement symbolizes the Holy Communion, where Christ generously gave the bread of Life to mankind. It also signifies the unity of the members of the Church and of the peoples among them, like the grains of wheat that unite and forms the bread, the same way all men are united under Jesus Christ.

The tradition for Christopsomo varies from region to region. Usually its shape is round but in places like Ithaca it is oval, forming the figure of newborn Jesus. In Sparta, it has the shape of a cross. In Drama, on the Christmas bread, a smaller one is placed… the large one symbolizes the cave of birth and the small one Christ himself.

One of the most impressive is the Sarakatsanei Christopsomo, with whole scenes of shepherd’s life. Sarakatsanei consider Christmas to be purely a shepherds holiday and they are proud of it because Christ was born among shepherds and sheep. (Sarakatsanei used to live as nomadic cattle breeders, in the summer on the mountains and in the winter on the mainland).

In the island of Crete, kneading of the Christopsomo is a ritual. Expensive ingredients are used, such as finely sifted flour, rose water, honey, sesame, cinnamon and cloves, while during the kneading the women sing: “Christ is born, the light rises, so the yeast will come alive”. First, they knead the dough and taking half of the dough they make a round loaf. With the other half they make the shape of a cross and place it on top of the loaf. In the center of the cross they place a whole nut or an egg, symbolizing fertility. The rest of the surface is decorated with various shapes, such as flowers, leaves, fruits or birds. This decoration emphasizes the purpose of the Christopsomo and expresses the beliefs of the faithful for a good harvest and the health of their animals.

The custom of the Christopsomo is deeply rooted in the Greek tradition and is considered to be a divine act and a pure Christian custom.

Try baking it your self… video recipe here or written here