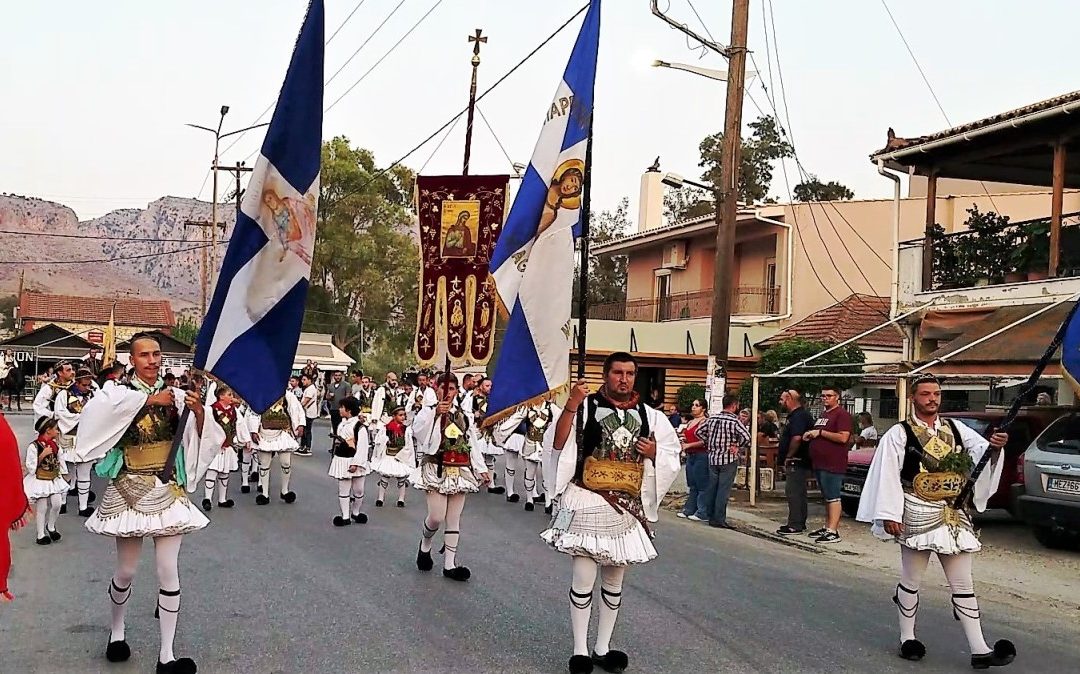 The word Panigyri is folklore, a popular and established pronunciation of the ancient word “Pas-agyris”, which means gathering of a crowd.

The festival satisfies the timeless need that people have to gather, to have fun, to celebrate and to rejoice. Wine, music, song, dance and good company relaxes and free people  from the shackles of everyday life, giving them hope and optimism. The festival is one of the longest-lived Greek institutions

Stratis Myrivilis writes: “It is true that there is no genus more liberal than ours. We live waiting for a celebration… and these festivals are full of beautiful customs, bravery, dances and songs, based on Antiquity …… To know our Greek self, we must realize the elements that make up our spiritual personality. Where do we come from? What are our roots? “How did we get to ‘where we are’?”

During the Turkish occupation, there was a relative freedom to perform the festivals.

The festivals played an important role in preserving our Greekness, on the one hand because through dances and songs the conquered realized their origin and learned their history -especially the young- and on the other hand contributed to the revolutionary struggle, as the proverb says, “festivals made the revolution”.

Many common elements are observed in the celebration of the festivals of the region of Aetolia.

The Aetolian festivals have a long duration and are a reference point in the course of the year, maintaining the meaning of the cycle of time. They are an opportunity to escape from everyday life, to have fun, socialize and strengthen relationships.

The core of the festivals is ethnic-religious and is connected with the Greek liberation struggle and Christianity, while their ancient origins have strong Dionysian elements.

Regarding their performance, the festivals follow a specific ritual, which includes a transition from residential areas to chapels, located in places with special symbolism, in nature with a spectacular view.

The main protagonists are the Armatoli (those who bare arms) wearing fustanela or dulama, they carry arms and the cavalry men who wear uniforms, hats and ride horses. The leading role is played by the gypsy organ players with their ‘Zygia”, Daouli (animal skin drum)and Zournas (flute). The music the dance and song accompany every aspect of the festival, helping to preserve the music-dance tradition of the region. The songs – mostly folk and historical – emphasize the ethnic dimension of the festival and elevate our fighters and national heroes to role models. The street party begins and escalates in the early morning hours.

The festivals are based on collective action. The crowd, as a community, acquires special meanings, both in theory and in practice. And while the protagonists are the “Armatoli”, the cavalrymen and the organists, everything is done with the presents of the crowd, without which the festivals would lose their ethnic character.

Testimonies state that these festivals are related to the encounters of “Klefton and Armatolon”. The first meeting took place on the fiftieth day of the feast of Ai Symios and the last one on September 6 of the Holy Asomata, at the feast of Ai Lia.

Through the Aetolian Festivals of “Armatomenon”, the continuity of civilization is preserved as well as the historical memory and tradition.

The festival is held on August 23, in the chapel of Agia Agathi.

The small church, built during the first post-revolutionary years, located on Mount Arakynthos (Zygos), about 10 kilometers from Aetoliko.

The 23rd of August in the Christian calendar is the day of “the Assumption of the Virgin”, while Agia Agathi celebrates on the 5th of February. However, the festival was established to take place in summer.

Preparations for the festival start on August 15th. The celebrants are armed and on horseback, organized in groups, led by their captain. They organize the celebration of the festival collectively and cover the expenses with donations. Each group secures its own “Zigia”.

The celebration of Agia Agathi covers the days from the 15th to the 24th of August. Starting at the end of the Divine Liturgy of August the 15th, the participants meet the rest of the time to organize and prepare. They gather in their hangouts, eat, drink, sing and dance together until the early hours of every morning.

On the 21st of August, early in the morning, the celebrants, accompanied by the musicians go from house to house and form their groups. Before noon they are in the tavern, where they will eat and party until the afternoon. Then they disbanded, to gather again, two hours later, at Panagia Pazaritissa. There they worship and then go to Agia Agathi. Arriving at the monastery, they pray, each lighting his own candle then ending up in their meeting points. Everything is ready there. The food and drink begins, along with the dance and song that will last until dawn.

On August 22, the preparations and the party continue with short breaks. A special moment is the ceremony welcoming the “Armatolous” from Stamna. Aetolikiotes and Stamniotes celebrants are accompanied by residents of the surrounding area, who arrive to honor Agia Agathi. The party lasts until the early morning hours.

On the day of the feast, the participants go with the accompaniment of their musicians to the chapel, worship and offer vows. After the Divine Liturgy, a memorial prayer is sung at the tomb of Panaretos Palamas, for the fallen heroes. Then the feast begins that lasts until the afternoon. Aetolians and Stamniotes all dance together, in a circle. In the afternoon, before leaving for Aetoliko, they light another candle and take pine twigs to decorate their belts. On the way back to the village they stopover at Kefalovryso.

There, the participants will dress and boarded to trucks to be transported to Aetoliko. The musicians at this time are playing the Agathiotikos tune, the special “anthem” for the occasion. Arriving in the village, the Armatoli and the horsemen are ordered in a procession: first two teenagers bearing the emblems, then the Armatoli, the horsemen, finally the musicians.

The procession of the celebrants is directed to the main square of Aitolikon, where they are welcomed by a large crowd and the local authorities. The dance begins with the captain first and in the center of the circle the flag and the arm-belts. The dancing and singing take place in the streets of the city and continue until the morning.