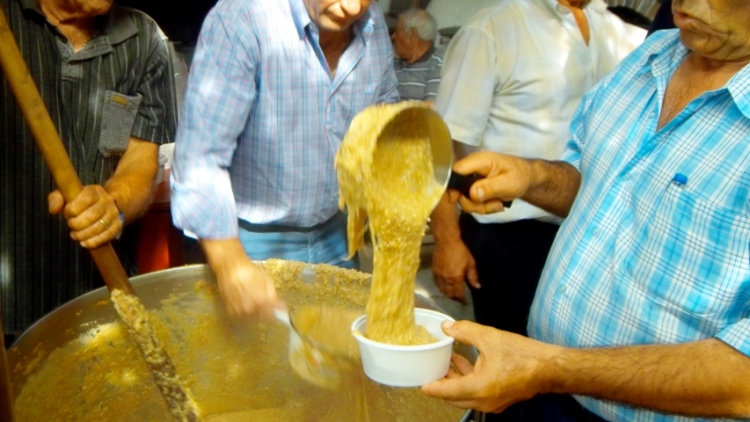 August 15, a big day for Greeks and the Greek Orthodox Church. The feast of the Dormition of the Theotokos (Mother of Christ) is celebrated. And it is celebrated by the Greeks everywhere in the world.

For me besides the religious meaning it has a cultural meaning as well which I will share with you.

The ‘Yiorti” cooked on my beloved maternal island of Samos, a feast my late grandfather used to organize at the monastery of Kotsikas, Zoodochou Pigi.

Yiorti it’s a name given for a traditional meal cooked on this day with goat meat, onions and wheat to celebrate the day they break the fast. It is cooked on other religious festive days as well and sometimes prepared with chick peas instead of meat for fasting purposes.

I remember my uncles Tilemacho and Cristodoulo, preparing the huge cauldron for the cooking of the Yiorti. About two o’clock in the afternoon, a day before the celebration, they placed the goat meat in large pieces in the cauldron for boiling. For two hours they boiled and skimmed any dirt and fat that floated on the water. After two hours of simmering the onions cut in quarters will be thrown in. The ratio for the Yiorti is one part of meat, one part of onions and one part of coarse wheat. Boiling lasts until midnight, when the meat is falling of the bones. Once cooled, the bones floating on top were removed.

At first light the wheat is added in the cauldron, salt, and began the most painful phase of the cooking process. For three hours the thick porridge had to be stirred continuously, to prevent from sticking on the bottom of the cauldron, and thus to become a thick mass. The stirring was done with a wooded “oar” and required strength and stamina, as they have to stir a mass of about 300lb, a project undertaken by a committee of men who were changing shifts.

At ten in the morning, the Yiorti was ready, and people began to arrive after the Divine Liturgy. The priest will bless the Yiorti and the “cooks” will start to serve the food to everyone until it is finished. Sprinkle a little black pepper on top and enjoy under a huge tree in the center of the churches’ yard. All this followed by a big feast of singing and dancing.

A great part of my life which always comes back to me every Dekapentavgousto!!!