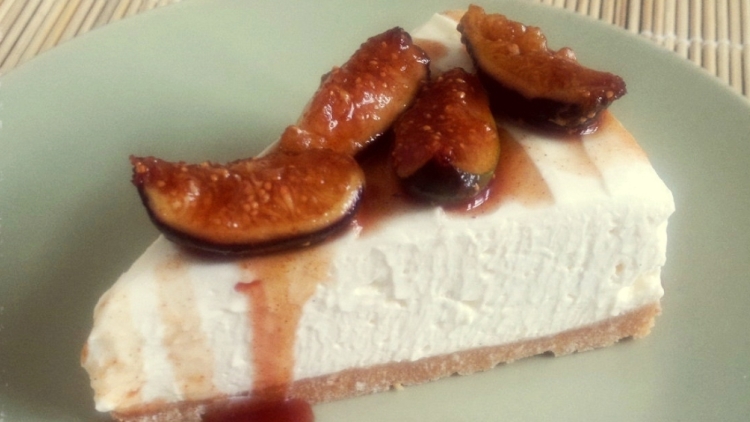 This tangy yogurt cheesecake is topped with ouzo-poached figs inspired by sikomaida, a traditional delicacy from Corfu made with dried figs macerated and kneaded with ouzo and pepper, which are formed into disks and dried in chestnut leaves. It’s also delicious with seasonal fruits, fresh or dried and poached, or with whole preserves.

PREPARATION
To prepare crust: Preheat oven to 325°F (162c). Coat a 10-inch spring form pan with olive oil; tightly wrap the bottom and outside with a double layer of foil.
Process Melba toasts and walnuts in a food processor until fine crumbs form. Transfer to a medium bowl. Add oil and 2 tablespoons sugar and toss until evenly moist. Press the crumb mixture into the bottom of the pan. Bake until lightly browned, about 10 minutes. Transfer to a wire rack and let cool to room temperature, about 30 minutes.

For the cheesecake: When the crust is cool, beat cream cheese and 1 cup sugar in a large mixing bowl with an electric mixer until smooth. Add yogurt, egg whites and cinnamon; beat until well blended. Pour the batter over the cooled crust.
Place the cheesecake in a roasting pan and pour in enough boiling water to come 1 inch up the outside of the spring form pan. Bake the cheesecake in the center of the oven until set around the edges but the center still jiggles, about 45 minutes. Turn off the oven and let the cheesecake sit in the oven with the door ajar for 1 hour. Let cool on a wire rack for 1 hour more.

To prepare topping: Meanwhile, place figs in a small bowl, cover with warm water and let soak for 1 hour.
Strain the figs, reserving the soaking water. Strain the soaking water into a medium saucepan. Add ouzo (or wine); bring to a boil over high heat. Add arbaroriza leaves (if using), cinnamon stick, orange zest and the figs. Reduce the heat to medium and cook until the figs are plump and the liquid is the consistency of thin syrup, 10 to 15 minutes. Remove the figs with a slotted spoon and set aside to cool. Stir 1/2 cup sugar into the liquid, adjust the heat to maintain a gentle simmer, and cook until the liquid is reduced by half, 15 to 25 minutes.

Discard the arbaroriza leaves, cinnamon stick and orange zest. Cut the figs and return them to the syrup.

Remove the pan sides from the cheesecake. Serve each slice topped with some of the figs sauce and fig slices.