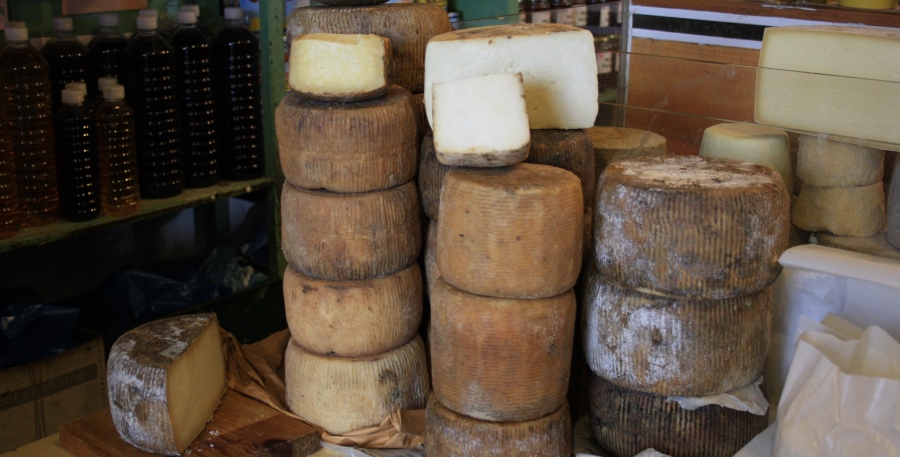 Αrseniko cheese is an integral part of the diet and tradition of Axoton, and for my taste maybe one of the best cheeses in the world.

Naxos is famous for the production of cheeses such as “Arseniko”, Naxos gruyere, cottage cheese, sour cream cheese, touloumotyri, ricotta, afromyzithra Naxou, thilykotyri, kefalotiri, kopanisti, oil cheese and cream cheese. Arseniko is considered the king of all types of cheese, since all the other are weaker and lighter. Arseniko Naxou has a thousand years tradition, recorded in the village of Koronos. The name Arseniko means “male” was found in old files recorded in 1000 AD, but it is considered that this was called and made the same way long before. The name of Arseniko was given as it is the strongest part of the “kazania” (a cauldron full of milk made into cheese). All the curd milk is called “diaforo”, from which comes the yogurt, cream cheese, and sour milk; however arseniko is more powerful than the rest in taste, quality and has more calcium.

For several generations together with olive oil played a key role in their diet because they are very nutritious and filling. The shepherds-cheesemakers persist today in the traditional way, despite the difficulties of producing cheese as such. Also they do not have milk industries, but exploit it themselves and thus keep the tradition.

The distinctive flavor and uniqueness of arseniko cheese Naxou is because the milk is not boiled, this way many of the enzymes are still alive, that is why the shepherds say that it is a “live cheese”. Every two to three months the taste changes as the cheese gets older and it becomes more spicy and aromatic. Also, for the traditional way the shepherds use animal rennet and strictly lamb and goat milk. After about a year they brush the cheese with oil sludge, placing it in olive oil or soaking it in wine and this gives us the traditional wine cheese. When still in the early stages the cheese is soft and it’s called Como. To this garlic will be added to make skordotyro.

I tried this wonderful cheese the first time I visited Naxos, a cheese that I believe is better than the best English Stilton or the best Italian Parmesan or pecorino. To complement this cheese, some hot bread from mr Panagiotis wood burning oven and you are in heaven!!!!