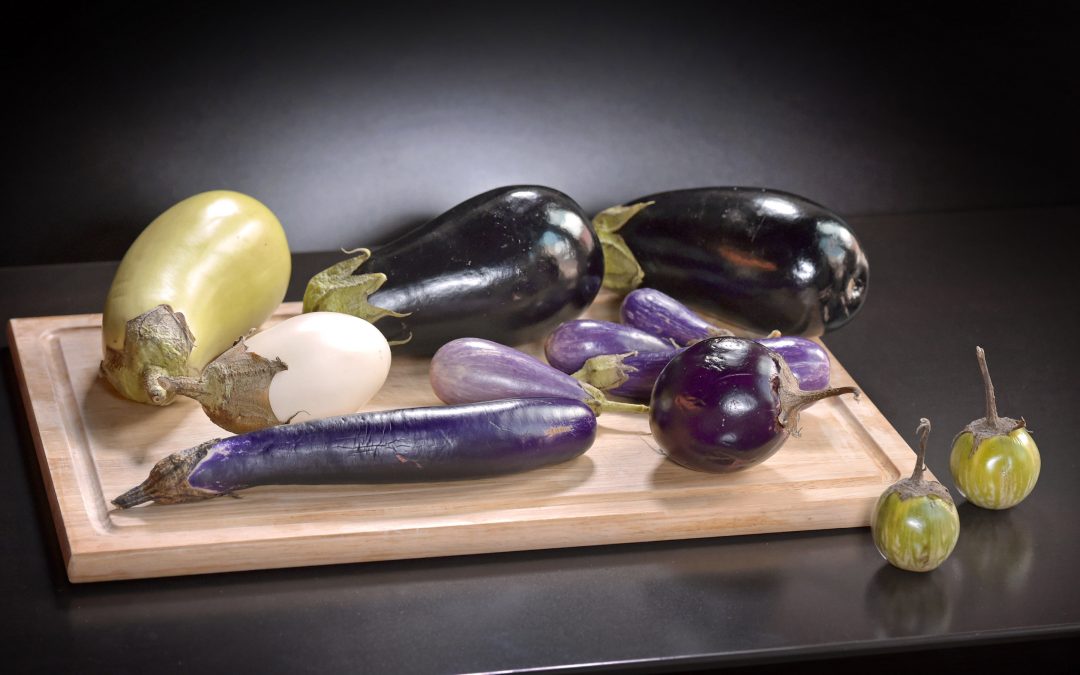 The plant species is believed to have originated in India, where it continues to grow wild. It has been cultivated in southern and eastern Asia since prehistory. The numerous Arabic and North African names for it, along with the lack of the ancient Greek and Roman names, indicate it was grown throughout the Mediterranean area by the Arabs in the early Middle Ages, who introduced it to Spain in the 8th century.

Because of the plant’s relationship with various other nightshades, the fruit was at one time believed to be extremely poisonous. The flowers and leaves can be poisonous if consumed in large quantities due to the presence of solanine.

The name eggplant is usual in North American English and Australian English. First recorded in 1763, the word “eggplant” was originally applied to white cultivars, which look very much like hen’s eggs. Similar names are widespread in other languages, such as the Icelandic term eggaldin or the Welsh planhigyn ŵy.

The white, egg-shaped varieties of the eggplant’s fruits are also known as garden eggs, a term first attested in 1811. The Oxford English Dictionary records that between 1797 and 1888, the name vegetable egg was also used.

Whereas eggplant was coined in English, most of the diverse other European names for the plant derive from the Arabic word bāḏinjān. Bāḏinjān is itself a loan-word in Arabic, whose earliest traceable origins lie in the Dravidian languages.

In English usage, modern names deriving from Arabic bāḏinjān include:

The Arabic word bāḏinjān was borrowed into Greek by the eleventh century CE. The Greek loans took a variety of forms, but crucially they began with m-, partly because Greek lacked the initial b- sound and partly through folk-etymological association with the Greek word μέλας (melas), ‘black’. Attested Greek forms include ματιζάνιον (matizanion, eleventh-century), μελιντζάνα (melintzana, fourteenth-century), and μελιντζάνιον (melintzanion, seventeenth-century).

From Greek, the word was borrowed into Italian and Medieval Latin, and onwards into French. Early forms include:

Melanzāna, recorded in Sicilian in the twelfth century.

Melongena, recorded in Latin in the thirteenth century.

Melongiana, recorded in Veronese in the fourteenth century.

Eggplant can be steamed, stir-fried, pan fried, deep fried, barbecued, roasted, stewed, curried, or pickled. Many eggplant dishes are sauces made by mashing the cooked fruit. It can be stuffed. It is frequently, but not always, cooked with fat.

TGCUS: It has not much of nutritional value but still it made made dishes famous, like:

The name supposedly derives from a tale of a Turkish imam who swooned with pleasure at the flavor when presented with this dish by his wife, although other more humorous accounts suggest that he fainted upon hearing the cost of the ingredients or the amount of oil used to cook the dish.

Another folk-tale relates that an imam married the daughter of an olive oil merchant. Her dowry consisted of twelve jars of the finest olive oil, with which she prepared each evening an eggplant dish with tomatoes and onions. On the thirteenth day, there was no eggplant dish at the table. When informed that there was no more olive oil, the imam fainted.