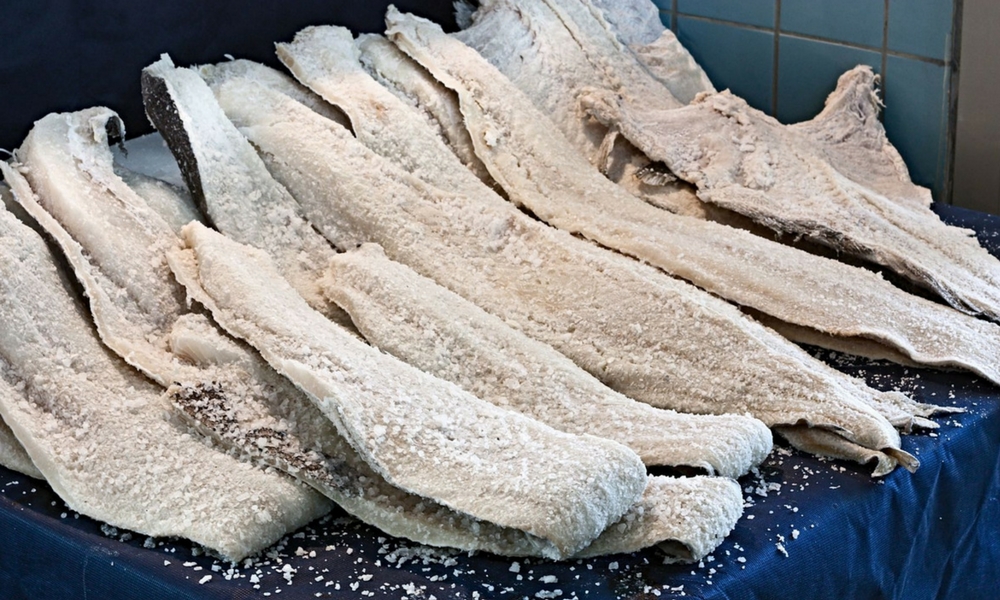 Bacalhau has been produced for at least 500 years, since the time of the European discoveries of the New World. Before refrigeration, there was a need to preserve the cod; drying and salting are ancient techniques to preserve nutrients and the process makes the cod tastier. More importantly, fish low in oils and fats allow for the drying and preservation process to occur. Cod fish have very low levels of oils, and most is located in the guts.

Bacalhau was long a major export of the North Atlantic region, and has become an ingredient of many cuisines around the Atlantic and in the Mediterranean

Traditionally the fish was sun-dried on rocks or wooden frames, but modern commercial production is mainly dried indoors with electrical heating. It is sold whole or in portions, with or without bones.

Before it can be eaten, salt cod must be rehydrated and desalinated by soaking in cold water for one to three days, changing the water two to three times a day.

Historically, and before overfishing occurred, Bacalhau was solely Atlantic cod. But more recently it includes varieties of whitefish such as Pollack, haddock and blue whiting

There are said to be over 1000 recipes with Bacalhau in Portugal alone and it can be considered the iconic ingredient of Portuguese cuisine.

Ironically enough, cod isn’t even caught in Portugal and it’s primarily imported from northern Europe, specifically around Norway and Newfoundland.