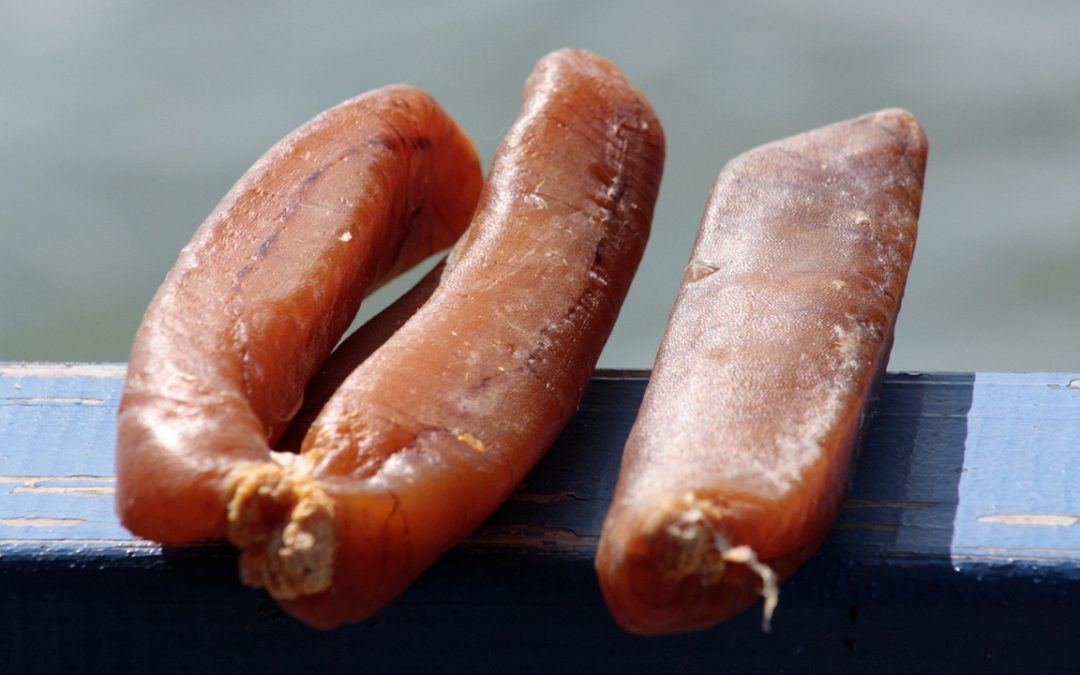 The method for preserving the roe sacs of grey mullet is thought to have originated with the Phoenicians, who spread it to Egypt, where the first documentary evidence of the practice is said to be found. I say “said to be found” because in the many explainers and histories of bottarga that can be found online, one claim about the existence of an Egyptian mural dating back to the 10th century BCE that depicts fishermen preparing sacs of roe, is recycled frequently. Egypt is also thought by many to be the origin point of bottarga for the wider world since the word “bottarga” is derived from the Arabic word “butarkhah,” which in turn is derived from Coptic.

But, according to Andrew Dalby, a historian and linguist, the roots of the word are a little more complicated. Dalby notes that bottarga was enjoyed by the inhabitants of Byzantium, which was colonized by the Greeks in around 600 BCE. As he writes in Tastes of Byzantium: The Cuisine of a Legendary Empire, “In addition to all the seafood delicacies known to classical Greece, the Byzantines appreciated salted grey mullet [sic] roe, ootarikhon (literally ‘egg pickle’: the Greek word is the source of Coptic outarakhon and thus of Arabic butarkhah and of the modern term ‘botargo’),” which seems to indicate that the Greeks can lay claim to the name, if not the process itself. https://www.seriouseats.com/

What’s not special about Greece’s own caviar? This Mediterranean treat comes in different variations across Italy, Sardinia and Greece, with its roots in ancient North African cuisine. Bottarga (or botargo or avgotaraho in Greek) is one of Greece’s most treasured foods and a firm staple of the super healthy Greek diet.

They say you can’t rush a masterpiece, and bottarga is no exception to the rule. This salted and cured fish roe delicacy calls upon ancient production methods and ultra-specific bio-climactic conditions to come into being. Its specific production methods haven’t changed since its ancient origins; making bottarga is a process that simply cannot be rushed. In our world of fast food and ultra-convenience, we think there’s something pretty special about participating in the fiercely upheld, ancient culinary tradition of bottarga.

So here’s the science bit: June and July are the best months of the year for harvesting the fish eggs from grey mullet and tuna fish. The prime spot for harvesting Greek bottarga is the lagoon of Messolonghi – a bountiful ecosystem full of plankton and supplied by the estuaries of two rivers off the central west coast of Greece. These hallowed waters are a haven for the famed grey mullet. This Ionian lagoon presents the optimum conditions for the grey mullet to breed in – its waters maintain a steady temperature ideal for gestation.

Once caught, the roe are gently removed from the fish by hand before being left to dry in their delicate membranes. Next, the membranes are steeped in salt water (25 grams of salt per 500ml) before the fish eggs are gently detached from their protective shells.

These pure fish eggs are then left in the salt solution for a further 48 hours before being gently air dried and pressed between wooden boards. Only at this stage, once the fish eggs are pale, flat and oval in shape, are they ready for the final stage in the lengthy Bottarga production process – the roe are threaded on cotton and hung to dry for several more months. Greek bottarga is often preserved in beeswax, unlike many other versions found around Europe and North Africa. This natural preservative serves to maintain the delicacy’s unique taste, untainted by synthetic products or packaging.

We recommend that you enjoy your bottarga slowly, too. Respect its extensive ancient production process with equal patience. Linger over thin slices of bottarga with bread, olives and oil before dinner. Sprinkle a little over your pasta and allow your palate time to savour the rich saltiness. Glass of retsina optional, but highly recommended…

Photos: The Greek Chef US